“Erin, where you feel naturally inspired and genuinely at home” 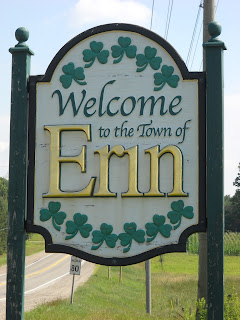 Erin: some residents pronounce Erin as in Air On, others say it as Erin as in Ear On.

Erin is primarily a rural community with farming as an important activity just outside of the downtown.  Most of the town's population work in the nearby cities of Brampton, Guelph, Mississauga or Toronto. Erin is also home to several notable riding stables, so a large equestrian presence.


Erin was established in the late 1820s by founder Daniel McMillan, originally known as McMillan’s Mills, and grew from the power and sustenance afforded by the Credit River, which runs through its downtown. As the village grew, the McMillan brothers constructed several mills, bringing jobs, and new residents to the village. With a growing population, several churches, a schoolhouse and hotels became part of Erin’s landscape. Following the death of its founder, the village was renamed Erinsville – a reflection of the Irish heritage of many of its inhabitants.  Every October, Erin hosts a large Fall Fair, complete with horse show and mid-way.  Steve Revell has written a book about Erin, “A Brief History of Erin Village”.

Since Erin’s downtown is not large, we decided to park at one end of town to walk  the main street.  We arrived just after 9am on a Saturday morning and getting a prime parking spot was easy.  We walked up the east side of the street which seemed to house the main stays of a gas station, drugstore and an LCBO (Liquor Control Board of Ontario which is where we in Ontario buy our wines, spirits and some beers), there was a little table with umbrella set up for free face painting outside of a toy store.  The bridal shop was going out of business and had racks of fancy dresses set up along the sidewalk.

Further along on this side of the street there were 4 churches, and some of the original homes of the founding fathers.  The one mansion was now an oil and gas heating company’s headquarters and its original glory was barely visible. 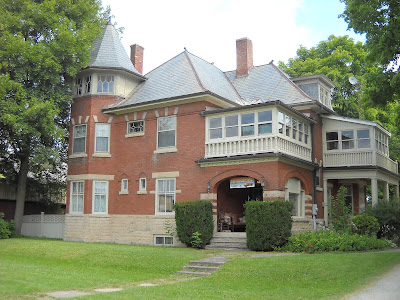 As we continued to wander up the street, we took a side detour to the newly installed park.  A lovely garden was designed at the entrance along with a statue of a horse and dedication plate to the future.  Along the park’s curved brick paver sidewalk, were lots of stone benches, all emblazed with a green tile shamrock (as tribute to Erin's claim of Irish heritage) and dedication inscription or name. There was a large gazebo in the centre of the park with a stone table and green tiled chest board imbedded into the top.  No chairs and no players were seen. 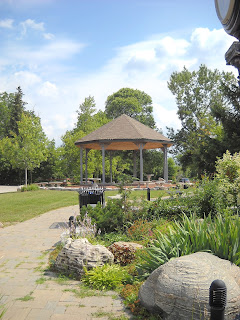 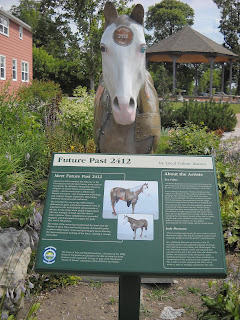 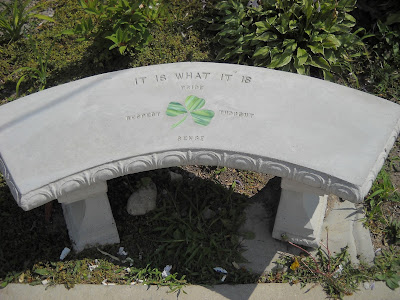 Back on to the main street sidewalk we encountered a home with a lovely fairy garden display around a tree.  A little further up the street a family was conducting a garage sale on the sidewalk.  Strategic of them as everyone had to walk through all the bargains to continue on.  We bought nothing.

Some of the beautiful older homes along Erin's main street 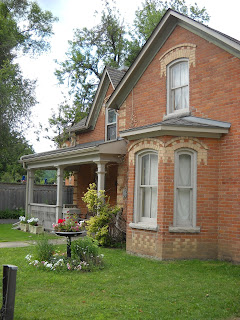 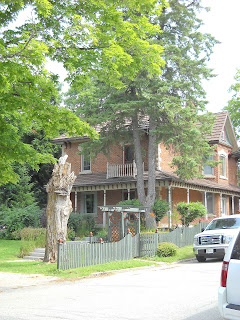 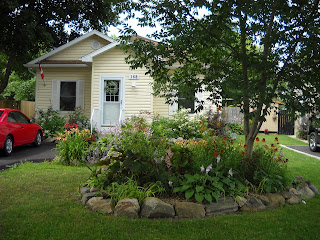 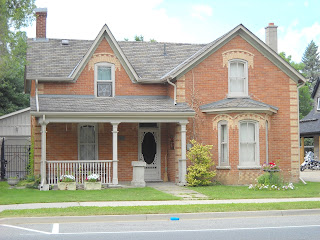 Almost every store had either a bench or patio chairs set up outside of their front location making for an invitation to rest and chat or just sit awhile to people watch. 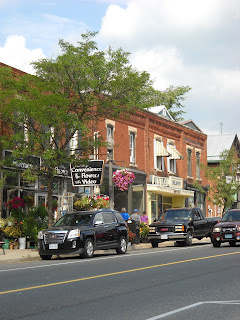 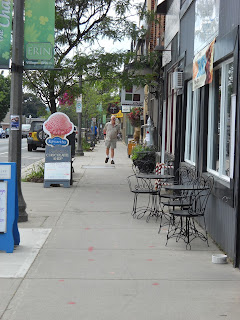 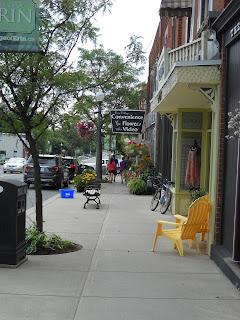 At the edge of town is the local pub/restaurant, Busholme Inn, which was built in 1886 by Dr McNaughton as a hospital. Several other doctors have owned the large house until 1926  when J.P. Bush bought and turned it into a hotel, it has been a restaurant/pub ever since. 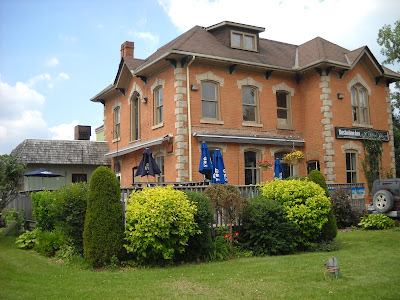 Just before the main block of shops, there is a little strip mall housing the grocery store, pizza and sandwich shops.  It had a look of being grubby, but what I thought was interesting was the large hill in the background, reminding us all of the wildness still close. 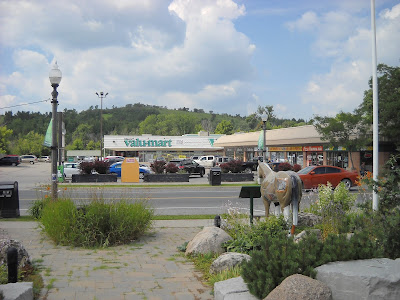 On the west side of the street there are gift shops, dress shops, and a book publisher’s office all fronting the main street. One of the dress shops, Hannah’s is owned by Deb, a lady I know through horses.  Very beautiful clothes. 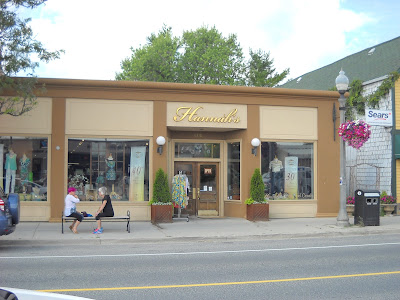 There was also a kitchen gadget / cooking classes store, and out front of this store was two tin men.  The street tin man had a sign encouraging people to have their photo taken with him but did ask for a donation this, raising money for children's charities.  The is also a  variety store/garden shop, a fabulous bake shop, a bistro and a tea shop.

In last year’s SPSH, I used this bakery as my example of #9 Bakery. 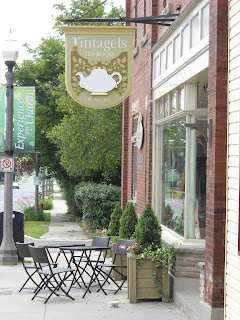 The tea shop, Tintagel's, is a lovely little shop and the ladies I currently ride with often gather here for lunch.  We like the light and reasonably priced  homemade lunches and ceramic, not tin, pots of tea.  We always dress up with hats and gloves when we become the ladies who lunch rather than the girls at the barn.  Tintagel’s has a side area of artesian jewelry and clothes along with some of the most beautiful tea pots and tea cozies I have ever seen.

The Rivera Bristo has a large wooden deck overlooking a large unused mill pond which is now filled with water lilies fully in bloom.  Even thought the bistro was not open, I did check out their web page menu and I think this is someplace I’d like to try dinner at.

Feeling a little peckish, we walked back up to the bakery to get ourselves a treat and something to drink.  The bakery has two tables with chairs set up out front, so after making our purchases, we sat outside and people watched while enjoying blueberry bear claws and tea.  I think the bakery is somewhere I would visit again, but not too often; diet and all.

Erin had only a few empty store fronts, was mostly street tidy, with little litter; they have large waste containers every few feet along the street, so no excuse to litter.  The street lights/lamps all had big hanging floral baskets and or banners declaring Erin a place to feel inspired and at home in. 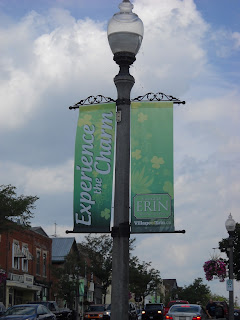 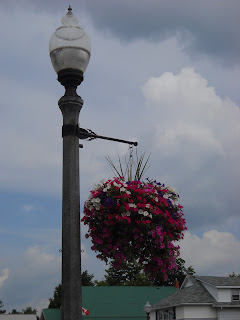 As I said earlier, downtown has a throughway running through so traffic was fairly steady but not too noisy. For a Saturday morning the pedestrian traffic seemed light, maybe it picks up in the afternoon.   So wandering end to end of the downtown took us only a couple of hours.  After finishing our treats we went back to the car and decided on a car tour of the outer parts of the village.  We drove through some of the older subdivision areas and through some of the newer estate lot areas.  Some really lovely big homes and some really tired old homes.  We then took a side road out of town into the rural areas past some beautiful properties, woods, creeks and horse farms.

I/we will be visiting Erin again.

Pairs - Up Too Close For Comfort

Linking In With Helena: http://helenascreativemaven.blogspot.ca/

I was brave and took the lead from so many of the other talented ladies in blogville and photographed up close, insects.

Getting close to this brilliant yellow spider did make me very nervous.  I noticed her web before I noticed her and after my initial stomach flip at being so close to a spider, I quickly got my camera and snapped away.

My second photo of the lovely butterfly was not nerve wracking at all - she was moving quickly and I wish I could have caught her with the wings open, there were lovely blue spots on her wings.

Email ThisBlogThis!Share to TwitterShare to FacebookShare to Pinterest
Labels: Pairs 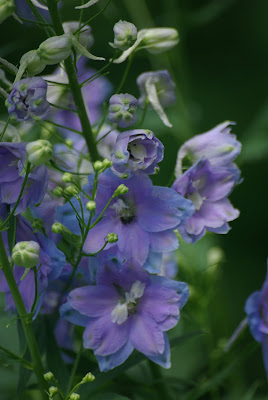 The previous week in memory seemed busy; day timer may argue with my analysis / vacuuming out kitchen drawers – where do all these crumbs come from! / Thursday lunch with a family member, a quick catch up and exchange of her closet clear out; I should say no to her stuff but why can’t I?  I don’t need this stuff – put this on the list of issues to deal with / on Friday, air conditioner at work broke down causing patients and therapists to complain (a lot) about heat / buying a huge bag of peanuts for the chipmunks and blue jays, who both were complaining (a lot) about no food, now chipmunk wars begin over who gets to be first  / another really hot and humid weekend /  gardens wilting / tomato plants in pots take a bucket or two of water a day to keep happy / early Saturday morning touring  the village of Erin, part of Summer Manifesto, Explore Wellington County/  visited an excellent bakery for some fresh treats and sat outside at their tables / Mr Man amazed that in the heat I would still order a cup of hot tea / while in the village bought a new to me, pink dress for upcoming birthday party /on Saturday afternoon, absolutely no energy to do anything but read; Come Thou Tortoise by Jessica Grant, a Canadian author/ patio sitting under the new umbrella  / letting laundry pile up for the evenings ahead which are forecast to be cooler / Sunday morning our turn to water so all the flower beds got a drink / watering flower pots with water from dehumidifier / Mr Man trimmed some dead branches from one of the Ash trees / light eating of salads for dinner / F1 race watching; nice tribute to Jules Bianchi an F1 driver who passed away last week from injuries suffered in a race last October / dreading the clinic on Monday with no air conditioning and cranky therapist(s) / trying to organize scrap materials for later in the week scrap time / watching Last Tango in Halifax & Poldark (yummy) / pondering a line from a book; “when you look up at the stars, you are looking at the past”,  that thought makes me sad / making the to do list for the week ahead; the 31st, should it include a celebration  cake for the 2nd full moon of July – the famed blue moon?  It’s also Harry Potter’s birthday, BONUS! There will be cake.

Hoping everyone has a glorious week and if you get the chance to gaze at the Blue Moon on Friday, remember I will be thinking of you.  Now that's a happy thought.