As part of our Summer Manifesto - Explore Wellington County, we visited  Belwood Lake Conservation Area in early June before the summer season started.  I am not sure why this is an "area" and not a park. Belwood Lake was a last minute substitution for Guelph Lake as Mr Man said this one was bigger and may have more to see/do.  We have driven by many times and neither of us are sure why we have not visited Belwood Lake before now.   I guess it was just one of those things that is on your radar but not acted on.  We encountered only a few groups of people on our outing; a seniors group fishing, fly fishermen in the river, a group home picnic outing and a few boaters. Our first impressions were that it was SO clean, tidy and well maintained, and quiet, which could be just the prep work for the start of a summer season.

Facts: Belwood Lake was created in 1942 with the construction of the Shand Dam, the first dam in Canada built solely for water control purposes. Conservation area visitors can stand on the top deck of the dam and see the vista of the Grand River valley below. A stairway along the face of the dam allows visitors to walk down to its base. The flow from the dam is used to generate hydroelectricity. The 12 km-long lake (7.5 miles) offers excellent boating, fishing and water-skiing, while a small spring-fed quarry offers an ideal spot for people to cool off on hot summer days.  http://www.grandriver.ca/index/document.cfm?Sec=27&Sub1=119&Sub2=0

After paying our entrance fee for a daypass ($10.00 (Cdn)), we were greeted with so much choice as to where to go first.  We decided on the drive to the left. 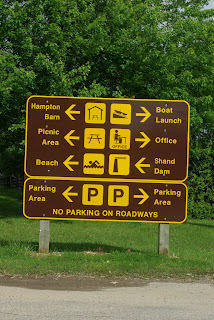 Just as we started off  we saw the large pole with nest box on top - two of the local Osprey young were flapping their wings in preparation for their first flight.  Note: It was several weeks after our visit that the birds were tagged and then took to the air for their first flights.  The birds have been monitored with a remote camera since they were eggs.

The Shand Dam is quite impressive looking, very big and there seemed to be only a little water coming through the sloots, so not sure how much electricity was being generated on this day.

As we enjoyed the quiet of the beach, we noticed a large blue heron  flying overhead, these birds also nest in the trees of the park.  While we didn't see the nest we saw in the edge of the water the evidence that the herons use this pond as a fishing hole and as they are wading birds they stick close to the water's edge.  This photo is of their tracks through the water.

Next up we stopped at the trout fishing pond, which is designated as a kid's only pond, but on this day, it was occupied by a large group of seniors on one of their weekly outings.  Several participants were wheelchair bound and the volunteers and workers were tasked with pushing the fishermen to the water's edge.  While we were resting there, someone did catch a trout - policy is catch and release.  I was trying to discreetly capture the group having their lunch as one of my extras for Rinda's SPSH - no luck, I got the evil eye from several of the staff and quickly put my camera down.

After we spent a couple of hours tootling around this section of the park, we headed over to the other side of the park and dam to the boat launching area.


The views from on top of the dam were spectacular and I walked down the stairs, although I ran out of energy before getting to the bottom.  When I paused to look up, I remembered that down also meant up and that was a lot of stairs.  One of the gross things on the stairs and path across the dam, was all the empty body parts of crayfish, eaten by the Blue Herons, the other  was all the spiders and webs on the stair handrails. I am with Ron Weasley on this, I don't like spiders.


After wandering across the top of the dam, we decided it was time for a cool drink and sit down.  As we were walking over to the boat launch and picnic area we noticed there was a lot of splashing in the water.  The blue heron was just finishing up his  bite to eat so we knew it wasn't him.  Turns out that the catfish come close to shore and stir up the mud to dislodge the tiny minnows for their dinner.  Catfish are very ugly and surprisingly quite large.   We had thought about sitting at the picnic table in the photo, but as we wandered over to it, we were dodging goose poop which was everywhere and  in ample quantities.

Once we got a cold drink from the dispensing machine, we got out our folding chairs, which in the summer, are always loaded into the back of the car, and set them up on the stony shoreline of a little alcove, out of the steady breeze coming off the lake.


We had a lovely out of the way view of the lake and we sat in silence for the longest time. The only thing that brought us back to conversation and movement was the lack of planning for food.  We were both hungry and it had been several hours since breakfast and as it was fairly early in the season the food concession was not open.  I honestly didn't think we were going to spend more than an hour or two at the lake.  Turns out 5 hours can pass quickly when you are enjoying yourself.

While we were both hungry it still took us another 45 minutes to walk back to the car.  We stopped to watch a few boats launch.  We watched the park staff unload and set up the rental station for both boats and Kayaks and then we walked out on the pier to watch fish swim in the reeds.  Surprising to us was our reluctance to leave.

Since our visit we have been talking over the idea of returning to Belwood Lake and renting a boat for a few hours to explore more of the lake - neither of us are skilled boaters so this will truly be the big adventure of the summer if we succeed!  So far Belwood Lake Conversation Area has been our favourite doing in The Summer Of Doing and Exploring Wellington County.

Posted by Patio Postcards at 08:00