Field Trip Friday - Part 1-The Characters In The Garden


As you tour my garden, I would like to introduce you to some of the characters that live in my garden and give it a sense of whimsy and keeps me from taking all this gardening too seriously.

So after you (photo) wander yourself around my garden, please come back to the patio for some tea or a cold glass of a Arnold Palmer, which I believe I have perfected, I think there are some treats to share if you feel peckish after the wander.


The angel I made in a ceramics class, she is about 12” and sits on her willow chair, which gets moved throughout the garden during the summer – her name is Meredith.

The metal water crane is known as Kevin V2 – Kevin from the movie UP and V2 because we had to have him replaced as the first one broke.  Kevin takes up residence by the pond, which will be undergoing some renovations in August, but not to worry Kevin V2 will still have water to guard.


Next Up is Mr Foxy Fox – he is waiting for the real ones to come back.

St Fiacre, patron saint of gardeners (and taxi cab drivers of Paris France), encourages me to believe in the power of a seed and believing. 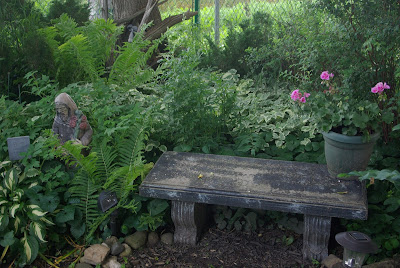 Tree Man was introduced to cover a scar on the tree trunk of our Manitoba Maple (which is not a true Maple).  A photo bomb by one of the residence chipmunks.  This one lives behind the fence underneath the compost barrel .  The piece of drift wood makes for a perfect perch to check out the wandering neighbours’ cat, Bella.

The Swinging Monk – totally for a sense of whimsy.  When I give him a push or two on his swing, I can hear him laughing and chuckling, which only helps to make me giggle and laugh along with him.

The Quiet Man was meant as a joke as he was originally placed on a tree knot facing the neighbours with the barking dog – they have since moved but The Quiet man, I think brings some good karma to the yard.

On the left is a face planter which I usually grow a vine so as to give him dreadlocks.  One year I did grow a type of grass that gave him the look of a buzz cut.   The Kids, on the right is a small statue of about 2 feet which my Father in Law gave us as he thinks of us as “the kids”.

Next up is the circle of friends, who usually host a citronella candle to help ward of mosquitoes on the circle patio.  When I sit on this patio I am so amazed how quickly everything has filled in their spot.  There is a very large rock in the corner, which I can no longer see because of the hugeness of the plants.  The Duchess of Albany clematis (a late season bloomer) has collapsed upon herself and has used the nearby forsythia bush to trail on.  I have tried to train her to grow up the trellis provided, but she is a modern day lady and is determining her own path.  In a pot behind the chairs is a tomato plant - Best Boy beefsteak.

This Man hangs on the wall at the back of the house, we tried putting bird seed in his hands but this brought field mice. 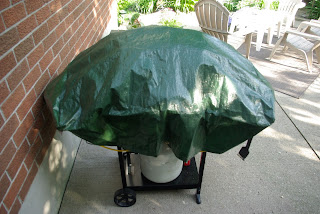 The barbeque on our patio; in its usual state of use.  We don’t barbeque a lot.

Thanks for dropping by and I do hope you visit again as there is always something changing, blooming and going on in the garden or on the patio.

Posted by Patio Postcards at 12:31