The Facts:  Puslinch Lake is a kettle lake located in Wellington County, Ontario, Canada. It is the largest kettle lake in Canada and second largest in North America. The lake provides many recreational activities, including swimming, fishing, sailing, motor boating, and water skiing. The Puslinch Lake - Irish Creek Wetland, a provincially significant area, is adjacent to the lake.  Kettle lakes are shallow, sediment -filled bodies of water formed by retreating glaciers or draining floodwaters.  Puslinch was created by a glacier retreating.  The lake is normally fed by surface runoff and underwater springs; there are no permanent inflow streams. 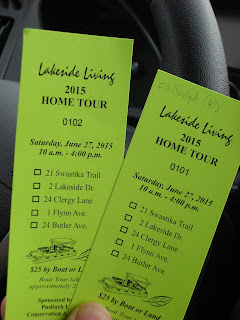 The boat / home tour is a fund raiser for the lake management.  Lake debris builds up so that a form of dredging is required.   A new approach has been implemented, involving moving the dredged material into porous bags, which allowed water to be released back into the lake. The remaining dried material is intended for sale as topsoil enrichment.  We were told this is at least a 20 year project to complete the initial dredging and thereafter will be required every 3-5 years. 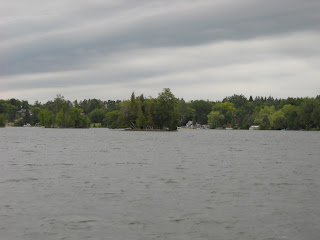 Puslinch Lake as seen while out in the boat. 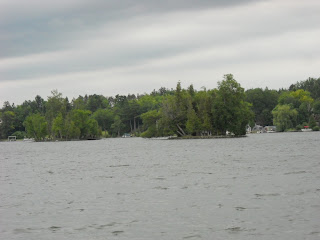 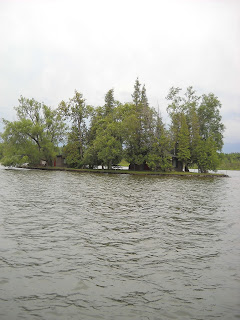 Puslinch Lake is big enough that there are


five islands; four have homes built on them. The largest island is managed by the Conservation Parks Board, so no building allowed.

Two of the 4 islands with homes (cottage). 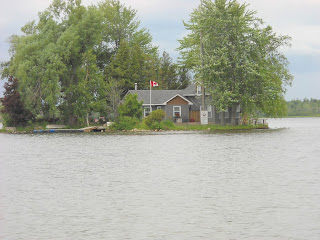 The day of our boat tour, it was brooding on a major rainstorm; luckily we were in the first bunch out in the pontoon boats being ferried to each of the five houses on the tour.  It had been quite some time since either Mr. Man or I had been in a boat and with the pending storms, the waters were a little choppy and there was a stiffing breeze, but we kept our sea seats just fine (no standing allowed in pontoon boats). Another appealing part of this adventure was that the monies raised were helping a natural piece of Wellington County recover and maintain. 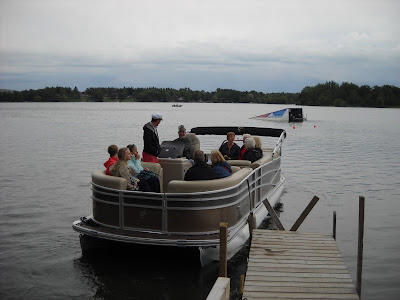 Our main interest was the boat ride and touring the lake, we did not stop off and visit each of the houses on the tour, plus none of the really big fancy homes were part of the tour. 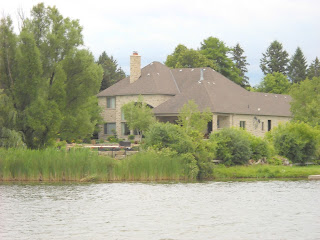 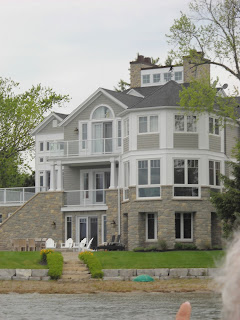 From the boat, a couple of the bigger homes, not part of the tour. 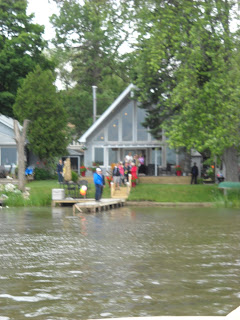 The one house we did visit was that of one of our boat captains.  Ray was quite an entertaining driver and his cottage he had built himself over a period of ten years.  As he is now retired he and his wife live in the cottage full time.  The enticing features of this home were the many great ideas and uses for smaller spaces.  Ray was most proud of his bathroom port hole window.  No photos were allowed inside any of the homes and being respectful of this, we took none.

This is a photo from the boat of Ray's house - sorry it isn't clear but the waters were starting to get very choppy & rough.

We finished our tour just as the rains started and within minutes of those few drops the heavy downpour started and all boat tours ended. 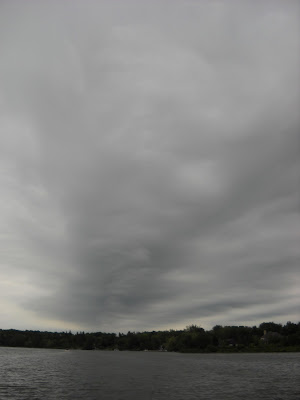 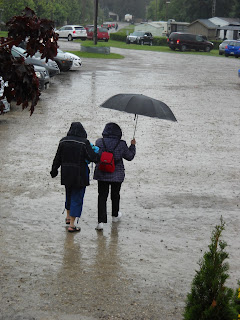 After lunch, while waiting to make a dash to the car, I was able to photograph one of Rinda’s SPSH Alternative items – someone carrying an umbrella. 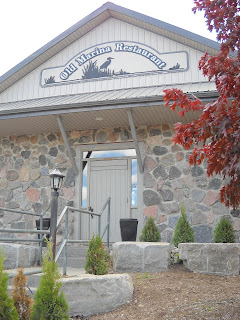 We had lunch at The Old Marina Restaurant, which sits right on the lake’s edge.  Inside every table has a spectacular view of the lake, outside there is a deck patio and ground level patio, both also have great views of the lake. The family that owns the restaurant is active in champion water skiing competitions.    On our first visit earlier in the month to the restaurant, I had a veggie burger which was a tad on the salty side but the smoked mayo made up for that.  Mr. Man had the Reuben, which he said was quite tasty & worth the goo mess.  We thought that the home made French fries could have/should have been fresher.  On our second visit after the boat tour, Mr. Man tried their homemade soup, beef vegetable and potato skins.  Again, he found both items too salty. I, branching out in my vegetarianism, tried their fish (cod) with chips.  The batter was a bit soggy and I left most of it.  I don’t think a third visit to the Old Marina restaurant is on our list.

This adventure ticks off several boxes; (1) a natural body of water for Rinda’s SPSH (2) Old Marina; eat at two new to us restaurants & (3) explore Wellington County.

Posted by Patio Postcards at 16:55